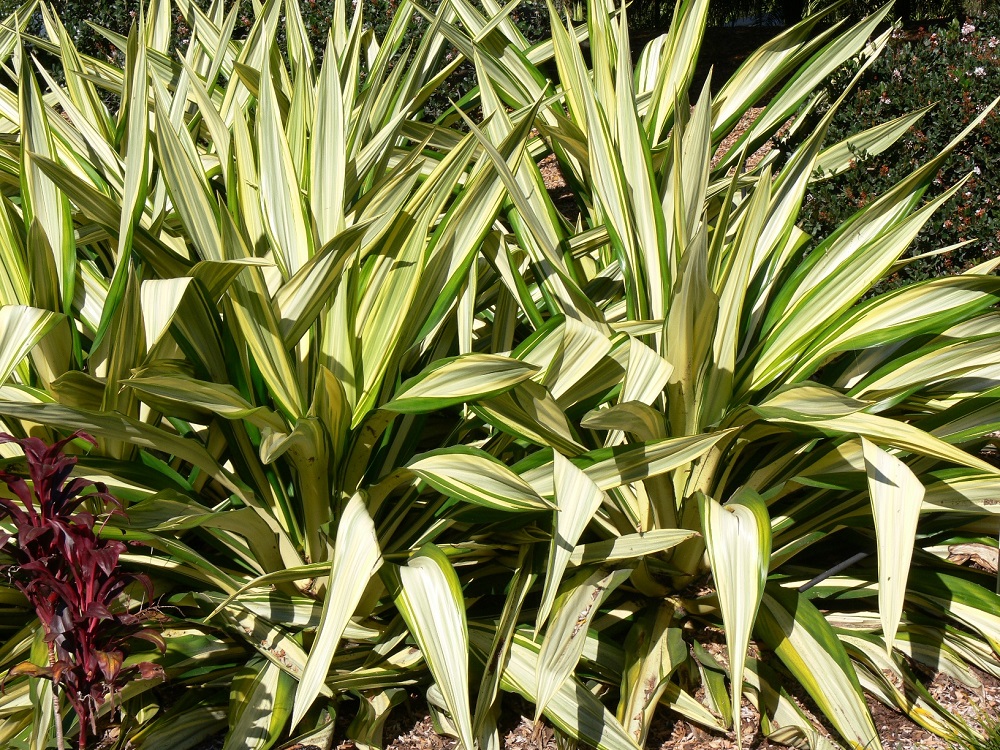 Originating from tropical Americas, many species of Furcraea can now be found naturalised around the world due to escapes from commercial production or the domestic garden.

Most species come from hot dry regions and are able to survive long periods with little water. They lend themselves well to an arid style garden.

The commonly grown species for the domestic gardener is Green Aloe (Furcraea foetida). Foetida means stinking and refers to the smell of its rotting leaves.

It is an impressive plant with a stately structure, more suited to the larger garden. A single specimen can provide a focal point or be an anchor in the middle of a garden bed. Mass plantings are equally impressive. More recent introduced is the cultivar F. foetida Medio-picta, a lush plant with variegated cream and green leaves. It is the one species of Furcraea which fits into a tropical planting.

The stem can grow to about 1-2 metres tall with a rosette of thick fleshy leaves to 2 metres long. The leaf of F. foetida has no marginal spines though some species do. Once the plant matures, it will develop a tall stalk resembling a giant asparagus shoot (6-12 metres high). It is known as a peduncle and will produce hundreds of green bulbils all of which will grow if they come into contact with moist soil.

Furcraea has been grown as a fire break and for erosion control on steep banks. It can also prove useful as a green boundary to a paddock. The peduncle can provide posts for short term huts or fencing

Commercially, the plant has been grown for fibre production. A medium grade fibre, similar to sisal can be extracted from the leaf. It has many traditional medicinal uses, some of which are being explored by western researchers.

The sap irritates the skin, so it is advisable to wear gloves and long sleeves when handling the plant. It is also toxic to fish. Avoid dumping waste from this plant near waterways or dams.

If you do not plan to maintain the spread of this plant, as with any potential weed species, avoid planting it or remove existing ones from your garden. A good alternative is the native Gymea Lily (Doryanthes excelsa). However, if you dispose of flowering shoots and other plant waste appropriately, this is a great plant to strike a pose with in your garden.

Tohm currently heads the team at Amber Leaf Landscaping and is qualified in horticulture, design and construction. His blog is a great place to get some ideas for your landscape, learn about specific plants that thrive in your local environment and see what inspires Tohm as he gets out and about.

Use this form to find things you need on this site